Participants: Niloofar Alaei Kakhki, Reza, (Ali & Morteza during the first half of the trip)

We prospect mainly the Elburz Mountain range between Semnan and Tabriz to study the hybridization zone between Pied Wheatear and Eastern Black-eared Wheatears. Most of the visited sites correspond to the different samples places. The year before we covered the area between Mashhad and Baladeh (North of Tehran).

May was a nice month to travel there. The temperatures were nice (not so hot than in June) and, in addition to the local species, we observed many migrant species.

On site, it is not possible to withdraw money. So you have to take with you Euros or USD.

It is virtually impossible to explore well the country without some local persons. For a good guide to Iran I can recommended Ali, he is friendly, he knows most of the birding places and the most common species.

This scientific trip was all organized by Reto Burri in collaboration with the Ferdowsi University of Mashhad. The weather was mainly sun and the temperatures pleasant. Only in Shemshak, the weather was cloudy, wet and rather cold.

The whole area between Firuzkuh and Semnan worth the trip. Whith more than 50 birds species encountered, it is one of the best visited place during our trip. The green surroundings of the river hosts many species included several migrant birds.

Some of the good areas for the migrant passerines are around Seranza. A small valley located west of Seranza (35°44'20.3"N 52°50'42.8"E) host some nice species such as White-throated Robin, Menetries's Warbler (migrant), Plain Leaf-warbler and Grey-necked Bunting. 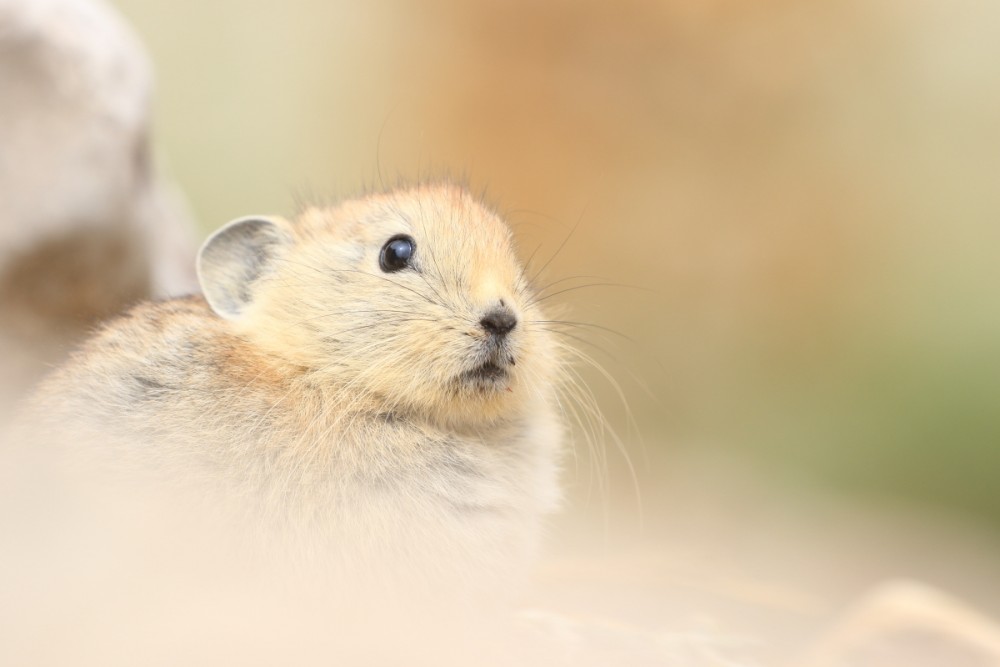 The north of Eyvanekey seems good for raptors. We observed Egyptian Vulture and Saker Falcon.

One of the most interesting areas was a small dry valley (35°24'41.7"N 52°05'29.6"E)  where we observed See-see Partridge,Pale Crag Martin, Desert Lark, Rufous-tailed Scrub-robin, and Streaked Scrub-warbler. The place is also really good for wheathers: we saw some Hume's Wheatears and, Ali and Morteza, photographed a Mourning Wheather. 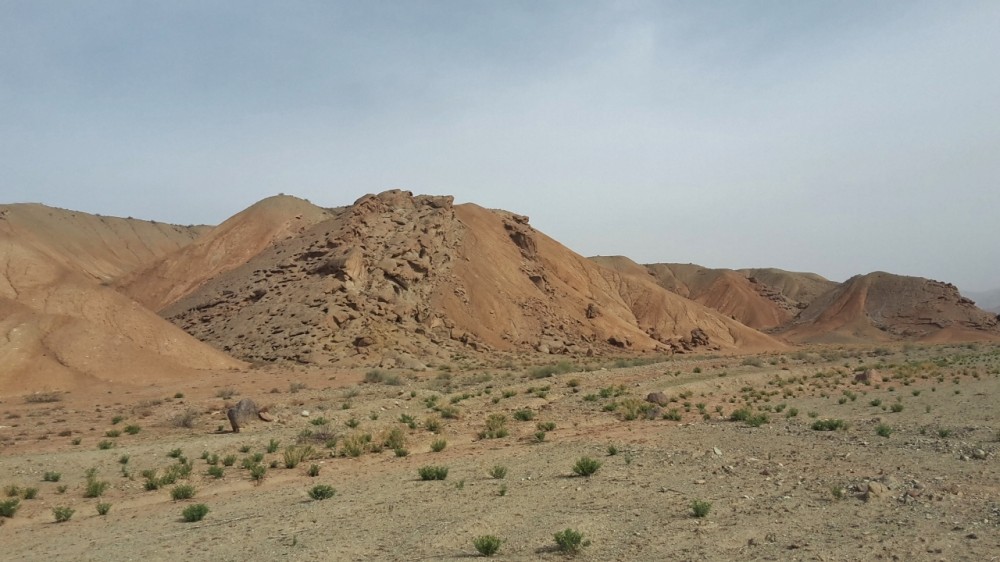 The southern part of Eyvanekey worth the detour.

We explored a bit the agricultural area in the south of the town. The fields are interspersed by bushes and we observed many shrikes (Lesser Grey, Red-backed and Isabelline), Blue-cheeked Bee-eater, Greater Short-toed Lark, many Rufous-tailed Scrub-robin: very common here, as the Black-headed Buntings.

The lake located just south of Eyvanekey was very good for the water birds. Some interesting sightings inclued Northern Pintail, Collared Pratincole,Terek Sandpiper and a group of 70 Red-necked Phalaropes!

The lake located near Solehbon look good for bird species linked with water. We observed one male of Citrine Wagtail in a wet meadow and some Red-necked Phalaropes, Slender-billed Gulls and White-winged Terns on the lake.

The area around Farahabad and the valley coming from Amin Abad seem good for many warblers. We encountered, for example, Upcher's, Eastern Olivaceous and Great Reed Warblers.

The avifauna here was almost the same as the areas between Firuzkuh and Semnan with some rocky slopes hosting, for example, Grey-necked Bunting and Rock Sparrow, but the average diversity was a bit lower.

We just did a small walk during the afternoon in the village of Shemshak. One of the most interesting observation there was an Olivaceous Warbler apparently in a stoppover at 2'650 m.a.s.l. (pretty high elevation for this species)!

The place was pretty cold and the weather cloudy.

We observed a few raptors along this road like Eurasian Griffon and Short-toed Snake Eagle. We encountered several times some Streaked Scrub-warblers, as well as Trumpeter Finches.

From this region and further west the Woodchat Shrike start to be relatively common.

This region is really remarkable and one of the most productive in term of species that we visited with more than 50 birds species encountered. The region is good for shrikes, wheaters and warblers. The open grasslands with a lot of bushy areas attracted many species and appear to be really good for migrant species such as Blue-cheecked Bee-eater, Sedge Warbler, Barred Warbler and Rosy Starling.

The bushes around this spot (37°20'34.3"N 48°22'52.3"E) seem to hold many birds (included some migrants like Sedge and Barred Warblers) and the little water point attract for example Desert Finches.

The small valley located southeast of Damdool was very interesting, particularly around some ruins and agricultural fiels (37°19'18.9"N 48°24'52.2"E). In the bushes we observed some White-throated Robin, Rufous-tailed Scrub Robin, Sedge Warbler, Upcher's Warbler and Eastern Orphean Warbler. We also saw some flocks of Blue-cheecked Bee-eaters and Rosy Starlings. But the highlight of the spot was the presence of two Caspian.

The area with scattered trees in the east of Damdool (37°20'01.0"N 48°26'06.8"E) was attractive for many species. We observed many White-throated Robin, Upcher's Warbler and Eastern Orphean Warbler as well as Streaked Scrub-warbler.

The most interesting species were observed in the west of Ardabil where the landscapes are green. We saw Little Bittern, Ruddy Shelduck, Great Reed Warbler, Sedge Warbler and Common Rosefinch.

The area was not so interesting but Isabelline and Northern Wheatears where common there.

The grassland areas in the south of Germi were good for Calandra Lark and Eurasian Skylark. Some Desert Finches occure in the rocky slopes and we hearded Green Warbler and Common Chaffinch in the wooded area along rivers.

We observed several water birds included Armenian Gull on the lake near Nahand. 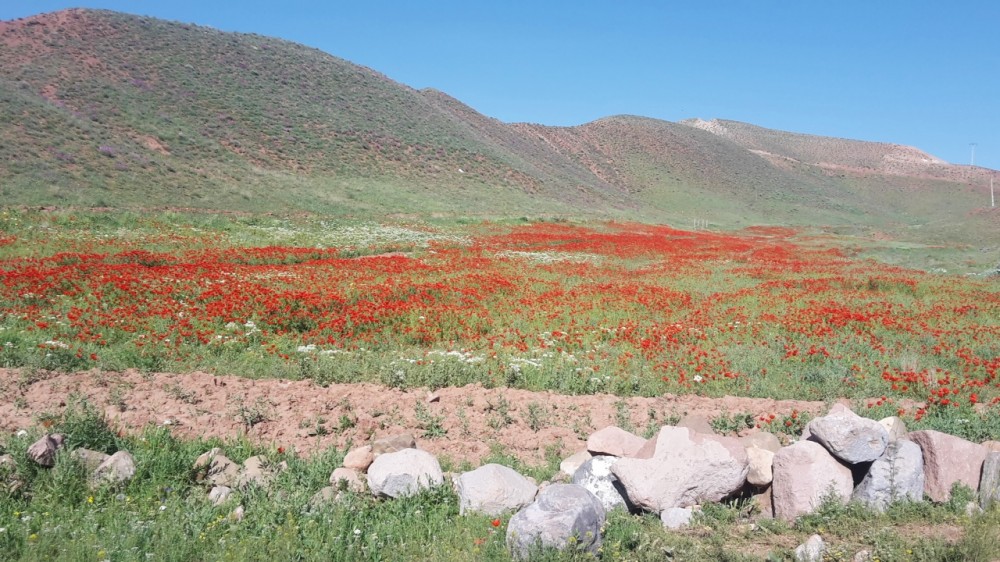