We did three weeks of volunteering in the Finca Palmonte. We mainly watched the birds early in the morning and a bit in the afternoon.

Finca Palmonte is really a hidden gem! It is a 80 ha private nature reserve with a finca managed by a Swiss-Ecuadorian couple, located on the eastern slope of the Andes in the Ecological Corridor Llanganates-Sangay. The reserve consists mainly of cloud forests, but you can find also some more open grazing areas with some bushes and isolated trees. Even if a majority of the forest directly around the Finca is secondary, it is nonetheless magnificent (trees full of mosses and epiphytes of all kinds) and with an incredible biodiversity. The garden alone is completely fascinating with almost 100 species of orchids.

For the moment only the garden and the Access Road are easily accessible. The other trails are not yet signposted and clear, but you don't have to go very far to see many interesting species.

Site map - [letters in brackets refer to the map]

The best is to reach the Access Road via the old mule track down of the Finca (Shortcut; see "Garden map"). One of the first area of interest is on the curve with the pastures with the small ponds on your right (A). Sometimes kingfishers or Fasciated Tiger-heron (Tigrisoma fasciatum) could be observed around the water. This open area with some isolated trees (as well as the other open areas just above and below) are good for the Lemon-browed Flycatcher (Conopias cinchoneti) or Dark-breasted Spinetail (Synallaxis albigularis). All the woodlands along the left side of the road are good for mixed-flocks, especially at the level of the first curve. A few tens of meters further, where the forest on the right comes closer to the road (after the second curve), is a nice spot  for mixed-flocks as well. There, I heard once a Plain-backed Antpitta (Grallaria haplonota) in the wooded slope on the right. The area with lots of bamboos just before the old chicken house (B) is very interesting. There, Short-billed Bush-tanager (Chlorospingus parvirostris) is present and I encountered once an Amazonian Woodhaunter (Automolus subulatus) and a couple of Coppery-chested Jacamar (Galbula pastazae). Lower down, the terrain is flatter with lemon orchards and grassy areas with small bushes (C). In the last stretch of road right before the gate you have a good view of the bushy and grassy area. In addition to the common species of these habitats, I observed also Dusky Spinetail (Synallaxis moesta), Bran-colored Flycatcher (Myiophobus fasciatus), Yellow-bellied Tanager (Tangara xanthogastra) and Chestnut-bellied Seed-finch (Sporophila angolensis). When you cross the gate, you can go down to the left to a flatter forest on the river bank (D). This forest is really beautiful and holds many interesting species such as Short-billed Bush-tanager (Chlorospingus parvirostris) or Fulvous-breasted Flatbill (Rhynchocyclus fulvipectus). I also heard a Scaled Antpitta (Grallaria guatimalensis) at the end of the descent.

The trail that go down south of the Finca is a little bit less interesting than the other surrounding places. However it seems really good for the Streamcreeper (Lochmias nematura). This species can be encountered in the flooded undergrowth espacially just after crossing the first creek (E) in the early morning. If you continue, you will arrive in a pasture where you have a good clearance to watch the regular mixed-flocks (F). When you continue after this open area in the forest along the river (G), you pass again in good habitat for the Streamcreeper (Lochmias nematura).

This trail is the continuation of the Access Road that go east of the Finca. The start of the forest, around the small swampy area (H), is good for the mixed-flocks. I regularly saw Fulvous-breasted Flatbill (Rhynchocyclus fulvipectus) there. At dawn, I heard regularly Scaled Antpitta (Grallaria guatimalensis), Long-tailed Tapaculo (Scytalopus micropterus) and I saw Rufous-bellied Nighthawk (Lurocalis rufiventris) and Green-fronted Lancebill (Doryfera ludovicae) from this same spot. The way up in the forest is good for the insectivore mixed-flocks, especially between the second and the third curve (I). I observed also once two Black-streaked Puffbirds (Malacoptila fulvogularis) at the second curve. The forest here, as well as most forested areas around the Finca holds many Rufous-breasted Antthrush (Formicarius rufipectus). When you continue up, you arrive in the pasture on the top of the ridge. The big bording trees and the bushy area on the left side (J) hosted important concentrations of migratory birds such as Cerulean Warbler (Setophaga cerulea), many Blackburnian Warbler (Setophaga fusca) and Swainson's Thrush (Catharus swainsoni). The area on the right of the end of the forest (K) is just as well worth it. From the pasture, I heard once a Wattled Guan (Aburria aburri) in the forest above.

Garden Map - [number in brackets refer to the map]

The old mule track (Shortcut) down of the Finca (1) is probably one of the best place around the garden to observe the birds. Not only do mixed-flocks often pass by, but the clearance to observe them is very favourable, especially from the bench. Interesting species observed there included Yellow-breasted Antwren (Herpsilochmus axillaris), Rufous-rumped Antwren (Euchrepomis callinota), Plumbeous-crowned Tyrannulet (Phyllomyias plumbeiceps), Ecuadorian Tyrannulet (Phylloscartes gualaquizae), Black-and-white Becard (Pachyramphus albogriseus) and Olivaceous Greenlet (Hylophilus olivaceus). North American species are also common around. From the garden, there is an opening in the vegetation that also allows to see this wooded area (2). The nearby biggest tree is always worth looking at the birds on it. I observed there Plumbeous-crowned Tyrannulet (Phyllomyias plumbeiceps), Ecuadorian Tyrannulet (Phylloscartes gualaquizae), Lemon-browed Flycatcher (Conopias cinchoneti), Grey-mantled Wren (Odontorchilus branickii) or White-winged Tanager (Piranga leucoptera). The west end of the garden (3) is a good place to watch the mixed-flocks in the canopy. In the southern part of the garden below the dinning room, a small "window" in the vegetation with a basic bench (4) also allows to observe the mixed-flocks on the other side of the creek. Near the oldest house, fruit trees (5) were attracting many tanagers and co. easily observable from the second floor of this house.

Behind the water tanks (6), there is a good viewpoint and large trees covered with epiphytes that often attract mixed-flocks with many furnariidae like sometimes Equatorial Greytail (Xenerpestes singularis). 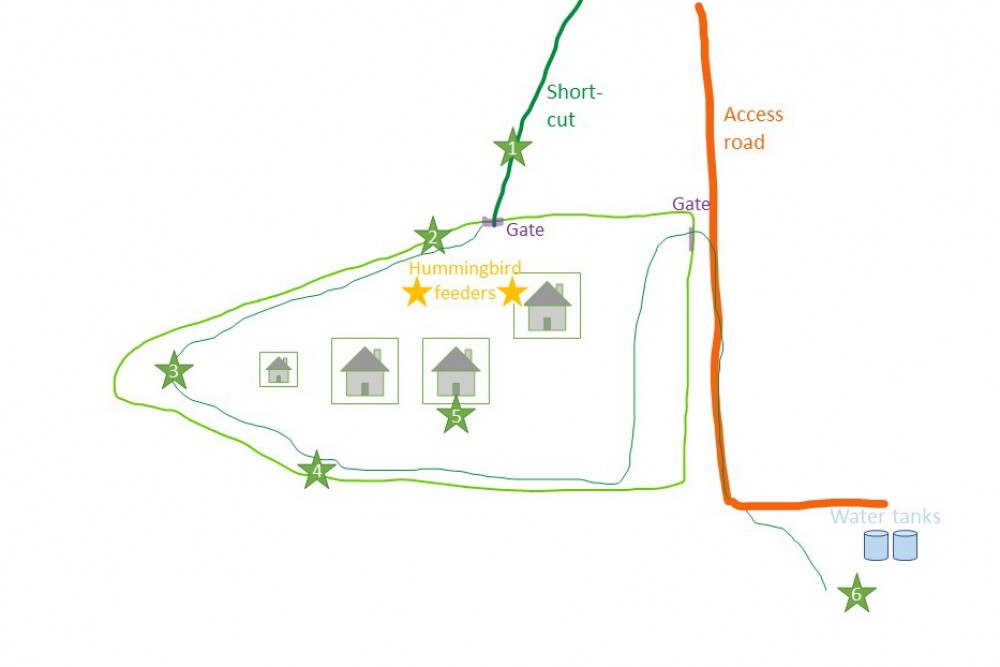 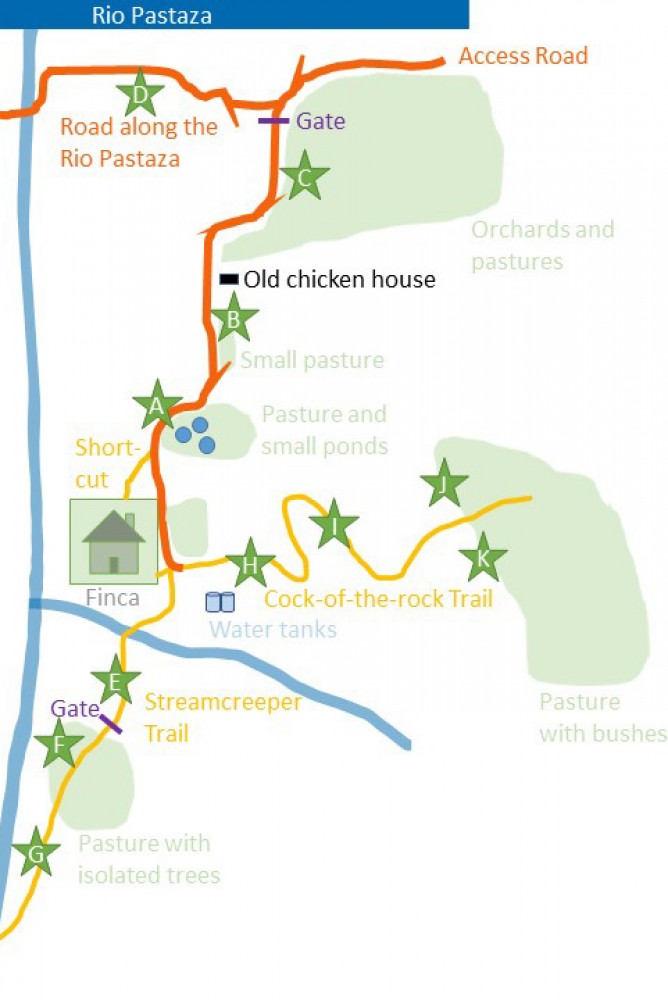 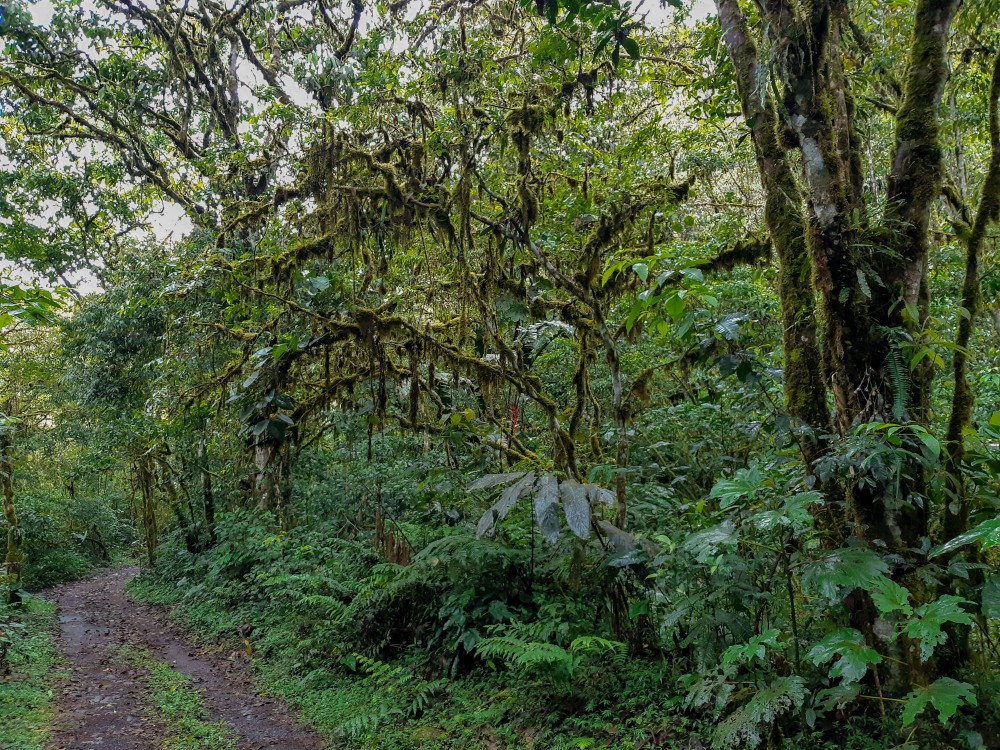 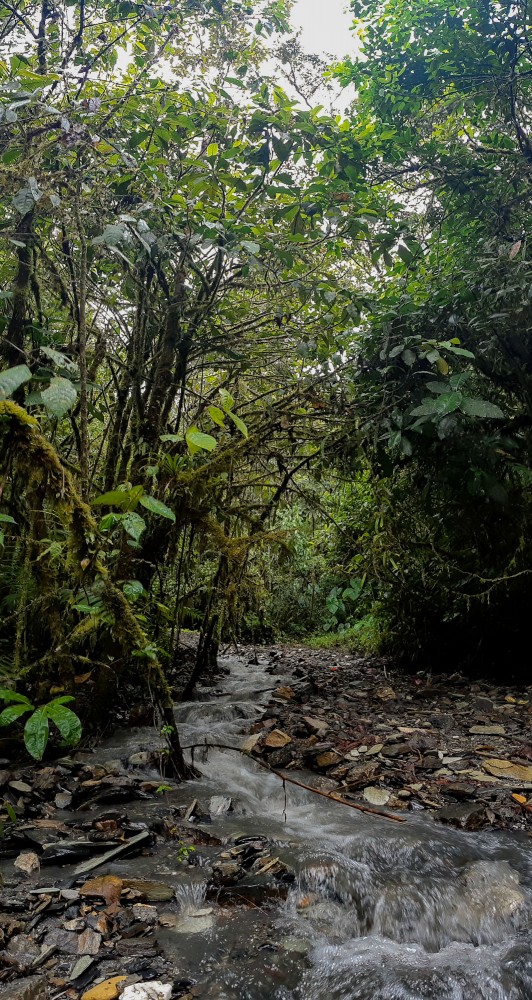 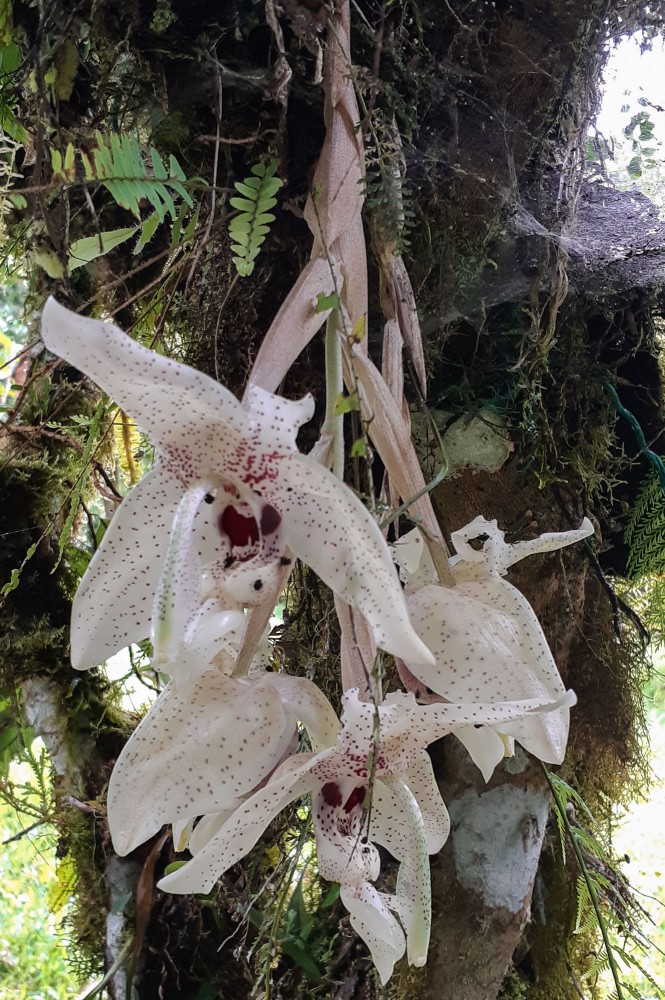 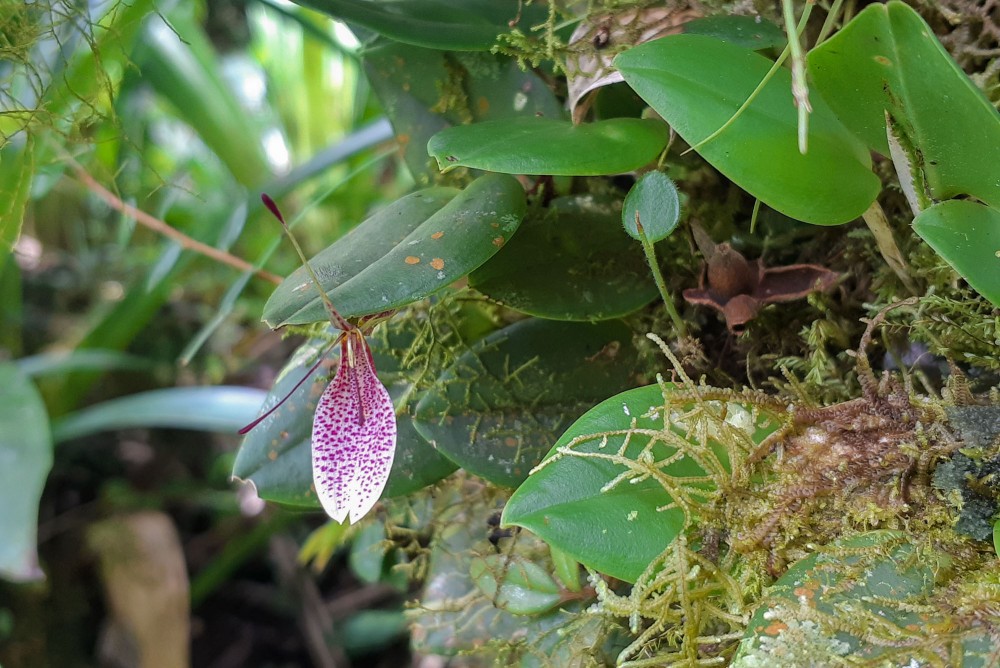 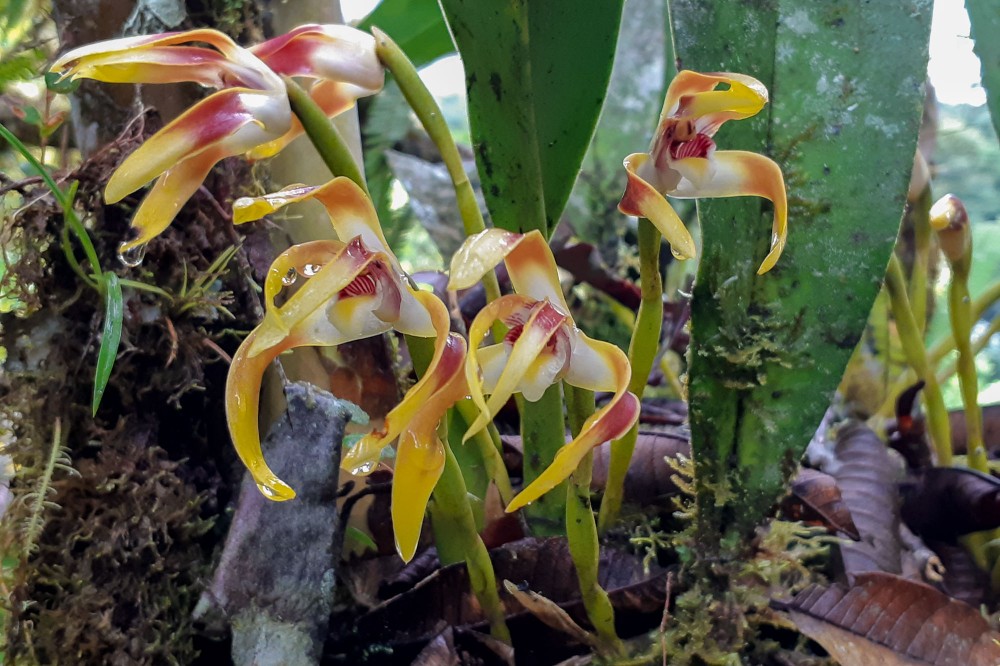 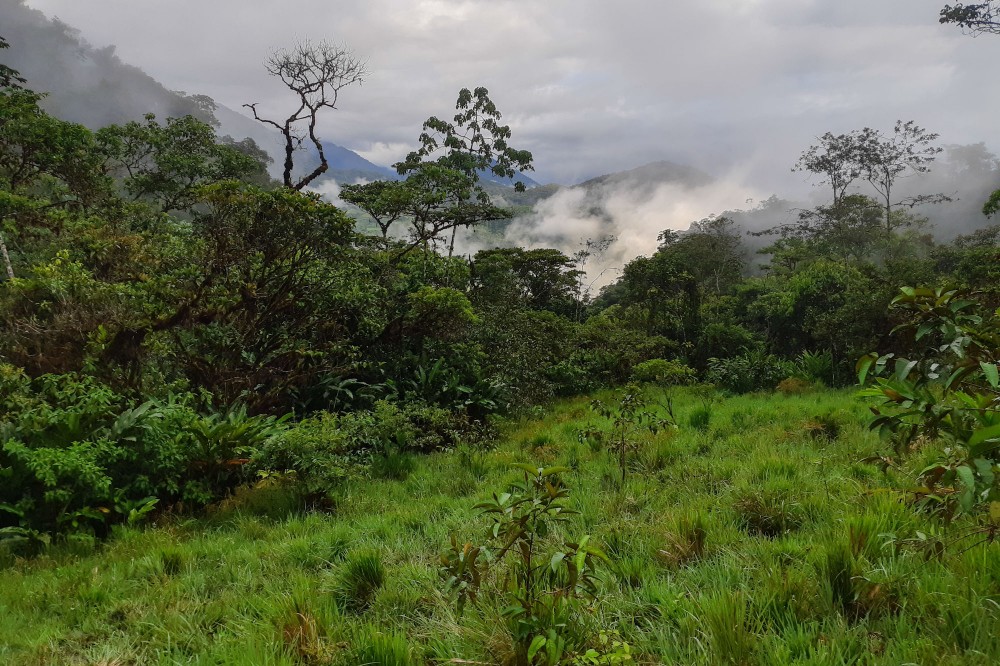 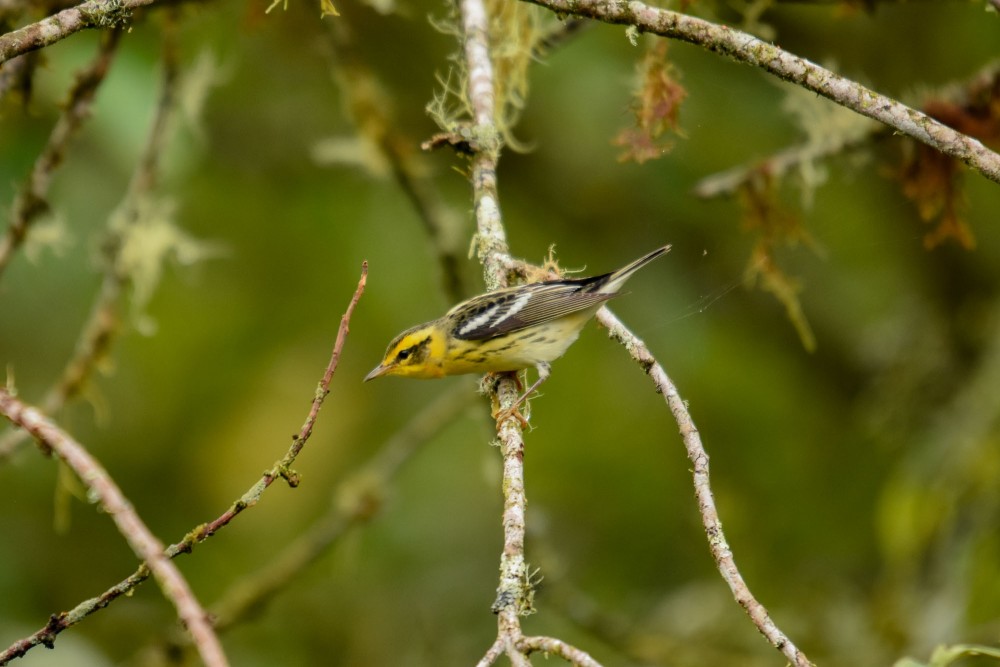 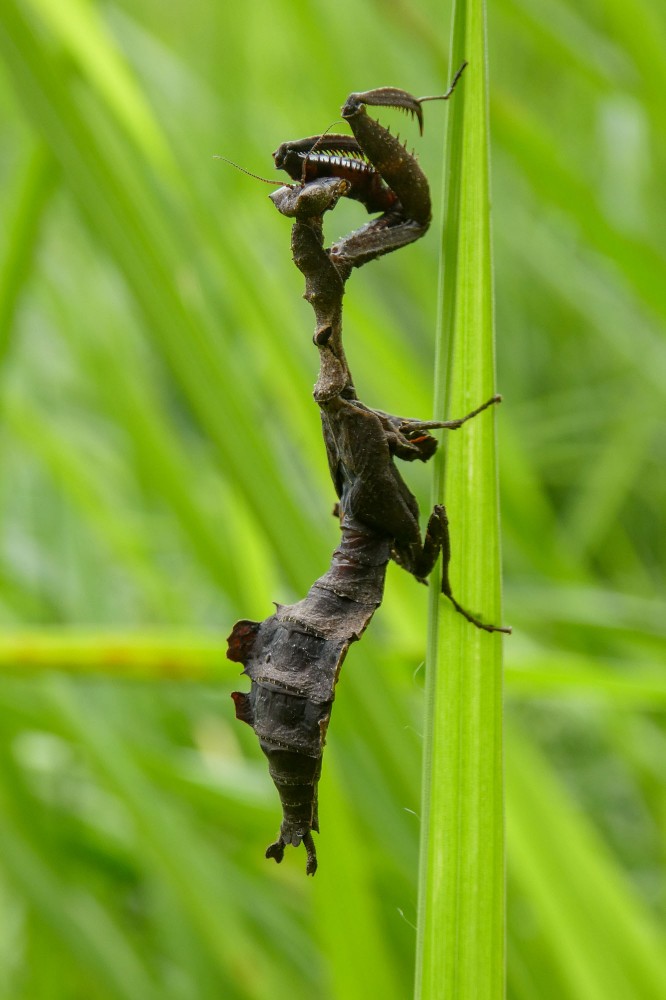 To access the reserve, it is essential to contact before coming Arlette and Alexandre, either via e-mail or via WhatsApp (+593 (0)99 717 94 68). You cannot reach directly the reserve by public transport or with your own car but they will organize your trip from Baños (Baños de Agua Santa), the nearest city or elswhere.

The Finca has 5 rooms and can host up to 8 people. There is electricity and hot water but no wi-fi. They can provide meals (the food is varied and very good, espacially the amazing breakfasts ;-)).

No local guide known (Arlette and Alex know mostly about orchids and insects, but they are interested in all wildlife).